Gurrelieder and the Schoenberg triangle drama 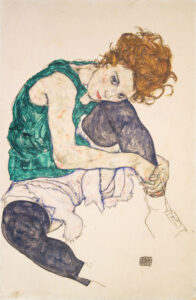 Arnold Schoenberg’s music is incredibly diverse. From the aphoristic piano pieces opus 19 to the grand oratorio Gurrelieder who last night was performed in the Stockholm Concert Hall in a unique collaboration between the Royal Philharmonic Orchestra and the Radio Symphony Orchestra conducted by Esa-Pekka Salonen. The final of this years Baltic Sea Festival.

No composer has stirred up emotions such as Arnold Schoenberg. A large part of the 1900 entire art musical production is in some way affected by Schoenberg.

Schoenberg was extremely influenced by the contemporary Vienna. A city that steamed of Freud’s anxiety investigations and explicit eroticism as we can see it in the paintings of Egon Schiele (above) and Gustav Klimt. Schoenberg was strongly fascinated of erotic triangle dramas, and was himself a part of a such with deadly outcome. His wife Mathilde left him for an affair with the young artist Richard Gerstl, but chose for a time to come back to Schönberg. Shortly afterwards Gerstl hanged himself front of a mirror in his studio. After that Schönbergs life was never as it had been. Nor the music. Schoenberg freed music from the traditional model that it revolves around a tonal centre. A revolution we feel the effects of today. When he dissolved the tonality and created twelve-tone system began a long period of great aesthetic contradictions.